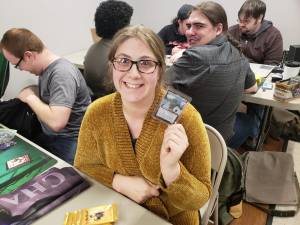 I went to the Bolter Hole’s grand opening on December 1, with the intention of participating in the Magic: the Gathering Commander Tournament, where the winner took home a “box topper,” which we later discovered was Kozilek, the Butcher of Truth. Participating in the commander tournament placed me a bit out of my comfort zone, since I am mostly a modern format player; however, I wanted to support the store’s opening and in hindsight, I’ll never turn down competitive Magic.

When I walked in to the Bolter Hole, I expected to see some familiar faces, and of course, people playing games; however, what I saw and experienced ended up being so much more. There were a lot of people at the Bolter Hole for its grand opening and I was immediately welcomed by different types of cookies, snacks, and shortly after was asked to put my name on a raffle ticket, just for showing up!

Shortly after, we were put into pods of 3 and 4 to start the first round of the tournament. In my first pod, I battled against the commanders Krenko, Mob Boss and Goreclaw, Terror of Qal Sisma. The Goreclaw deck was being piloted by my boyfriend, which was difficult because one of us would ultimately be eliminated. My commander was Yuriko, the Tiger’s Shadow. To my surprise, I won the pod, which was also bittersweet because I was under the assumption my boyfriend was no longer in the running for the Kozilek box topper.

Luckily, because of the odd number of competitors, there were two subsequent games set to determine who would get a “second chance” to fight in the championship pod.

Tensions were high during the championship pod, not only because I was facing my boyfriend, but because our third competitor had a triple-sleeved deck, complete with many masterpieces, dual lands, and Alpha and Beta cards ($$$$!). To top it all off, people wanted to watch us play, and we accumulated an audience. I was once again facing my boyfriend’s Goreclaw commander. The third competitor had two commanders– both with partner, Silas Renn, Seeker Adept and Thrasios, Triton Hero. I quickly found myself asking for rulings on the mechanic “partner.”

The match was intense and probably lasted close to an hour; however, I emerged victorious! The Kozilek box topper was mine.

I was very proud of myself, considering I did not expect much of myself as I entered the tournament. I was also proud to represent the female community of magic players and to make a public spectacle of my victory.